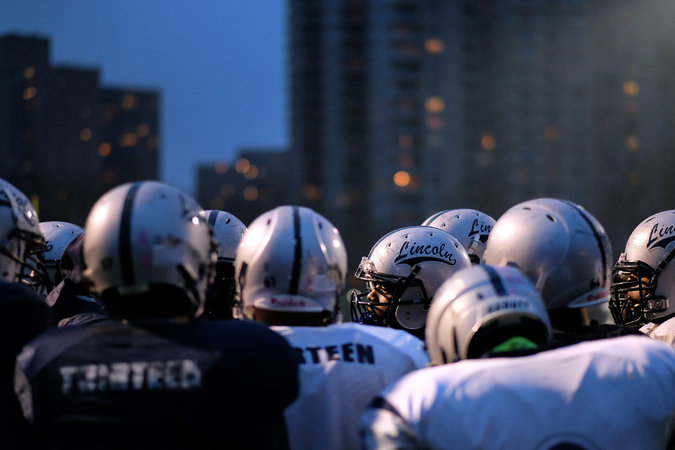 For decades, a powerfully built football player tottering on his feet was considered just a part of the game. But increasingly, potential signals of a head injury, like that stagger, are considered dangerous warning signs that should be scouted for on every level of the sport.

Amid that growing concern about the dangers of head injuries, Mayor Bill de Blasio on Tuesday announced a $1.2 million donation by Steve Tisch, the chairman and a part owner of the New York Giants, that would pay to have trainers or emergency medical technicians at all contact football practices for New York City’s public high schools.

The money will enable the city to have the new personnel for all 53 football programs, which have 3,500 varsity and junior varsity players, for about two years. City officials say the plan is to continue the program after this money runs out. Medical professionals are already present at football games, but Mr. de Blasio said that having the supervision at practice was something that some schools could not afford. 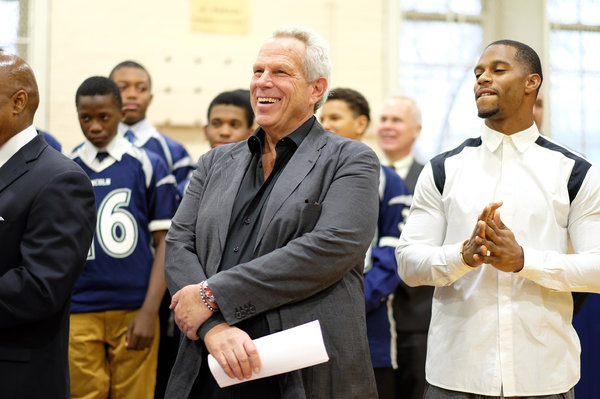 “We today have an opportunity to breathe easier and know that our children are going to be safe pursuing the sport they love because of the wonderful generosity of Steve Tisch,” Mr. de Blasio said, standing in the Erasmus Hall Educational Campus gym in Brooklyn, flanked by its football team and the junior varsity squad of a rival, the Abraham Lincoln High School Railsplitters. “Before this, a lot of schools didn’t have the resources.”

The atmosphere was bright at the announcement, where several of the football players and teachers stormed past various elected officials to be photographed with Victor Cruz, the injured Giants’ wide receiver, who accompanied Mr. Tisch.

The context, however, was quite sober. The long-term effects of repeated concussions, including depression, dementia and occasionally on-field deaths, have become apparent, and even the gift itself could be seen as a tacit acknowledgment by a National Football League owner of the dangers of the sport.

“A lot of parents are concerned about their kids playing contact sports,” Mr. Tisch said, describing himself as the parent of a high school football player. “But as a parent, my level of confidence and comfort is greatly increased if I know that there are trained coaches as well as trainers who can recognize concussion symptoms, know concussion protocols, and I hope that’s one of the real benefits of this program.”

The N.F.L. has agreed to pay hundreds of millions of dollars to settle a suit brought by about 5,000 former players, who said the league had hidden what it knew about the dangers of repeated head injuries.

The league has also introduced an elaborate protocol for identifying and responding to concussions among its players, which includes an army of doctors and neuro-trauma specialists on the sidelines, cognitive testing in the locker room and a head injury “spotter” up in the press box during games, watching for telltale signs of a potentially dangerous collision — a player who wobbles on his strong legs, or shakes his head and repeatedly adjusts his helmet after being slammed to the ground.

High school leagues also pay increased attention to head injuries. All public school football coaches in the state must receive training every two years in how to spot and address concussions. Students who are suspected of having sustained a concussion must be symptom free for at least 24 hours and receive a doctor’s note before they can return to the field. Private schools may adopt the same policies, but are not required to.

“It has definitely changed,” said Shawn O’Connor, head coach of the Lincoln football varsity. The increased news media attention “makes it more noticeable to kids and parents, and coaches are little more educated,” he said.

Mr. O’Connor’s Railsplitters will play the Erasmus Hall Dutchmen at Yankee Stadium in the city championship game next week. There will be a medical professional at the game, keeping an eye on the players.

Knock to the Head
Thursday, 11 December 2014
Knock to the Head The Huffington Post Journey Bailey December11,2014   S               Something felt terribly wrong. At first I was just a little woozy. Five minutes later I threw up Taco Del Mar all over the locker room floor, and then had the unfortunate aim of collapsing in it. It was clear that this was unlike any concussion I had received in my past. The next morning I woke up in a hospital room gasping for air. Oxygen tubes lining my throat were... Read More...
Headed for Disaster: What We Know About Traumatic Brain Injury
Thursday, 04 December 2014
Headed for Disaster: What we Know About Traumatic Brain Injury CBC News Miranda Leitsinger December 3,2014   In the wake of the suicide of Kosta Karageorge, an Ohio State University football player who allegedly suffered from debilitating concussions, questions once again have been raised about the link between brain injury and mental instability. A coroner on Monday ordered a special exam to look for signs of traumatic brain injury in Karageorge, a defensive lineman for the powerhouse... Read More...

Football player told mother about concussion worries
Saturday, 29 November 2014
NFL footballplayer told mother about concussion worries The Guardian Associated press Ohio November 29,2014   Defensive tackle Kosta Karageorge missed practice on Wednesday and Thursday and has not been heard from since The mother of a missing Ohio State football player has told police he texted her about his prior concussions the morning he disappeared. A missing-person report filed with Columbus police Wednesday evening says defensive tackle Kosta Karageorge told his mother he was... Read More...